It’s a lovely state, nestled in the tree-covered Appalachian mountains—but West Virginia, the state hardest hit by the opioid crisis, faces serious problems. According to the state’s Opioid Response Plan, West Virginia has seen its opioid overdose rate quadruple since 2010, reaching 52 per 100,000 inhabitants. Far behind is second place Ohio, with an overdose rate of 39.

Of all the states, West Virginia has taken the highest per-capita economic hit from the opioid crisis. In March the American Enterprise Institute (AEI) ranked it first in the country in total opioid-related expenses per person: $4,378. West Virginia spends the largest share of its gross domestic product (GDP)—12.03%—on opioid-related problems, according to a January report of the AEI. As the table below shows, that’s more than twice as much as any other state. 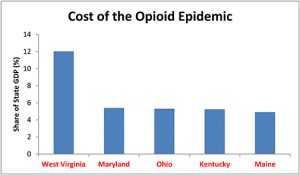 So it’s no surprise that in a recent year, the AEI spotlighted West Virginia as home to 14 of the 30 counties in the nation with the highest per-capita opioid-related costs.

All told, the estimated economic hit of the opioid epidemic to West Virginia’s economy is almost unbelievable: $8.8 billion a year, according to Rahul Gupta, MD, Commissioner and State Health Officer, West Virginia Department of Health and Human Resources.

Some people blame unemployment for illicit drug use; others point out that it’s just as likely that heavy drug use leads to unemployment.

Investigators recently began really looking into the opioid problem. Notable among recent reports: An Opioid Response Plan for the State of West Virginia, compiled by experts, with input from the public.

The Response Plan doesn’t blame unemployment for West Virginia’s woes. In fact, the word “unemployment” appears nowhere in the plan’s 27 pages. Instead, in a section on treatment expansion—termed “a critically important initiative”—the report includes a remarkably candid summary of West Virginia’s problems:

Unfortunately, West Virginia has some of the most burdensome regulations on the provision of substance use disorder treatment that includes medications. These restrictions include a moratorium on new programs that use methadone and extra state rules that limit the prescribing of buprenorphine. These policies may reflect, in part, a history of public opposition to the use of medications for treatment, which is reflected in some of the public comments. This opposition may be the result of a vicious cycle. The historical underfunding of treatment with medications has made it difficult for high-quality programs to thrive. . . (p 16)

The Opioid Response Plan went out for a public hearing, and for review and comments. Suggestions from an expert panel were incorporated.

Things moved with a speed rarely seen in government endeavors. Listed below are some highlights.

Mid-January—Statewide screening of treatment needs in Medicaid patients began, with brief intervention, and referral to treatment (SBIRT). Methadone treatment, with counseling, was available as an opioid withdrawal strategy. Also included: a naloxone awareness and distribution initiative.

April—West Virginia awarded a $263,000 grant to Prestera Center to establish a quick response team (QRT) program. The program calls for medical, law enforcement, and mental health specialists to contact people within 72 hours of an overdose to try to get them into a treatment program. Officials hope to set up a QRT in every major city in the State.

What West Virginia has accomplished so far—in less than a year—is truly impressive.

Although success won’t come easily for the state, those who created the Opioid Response Plan, using a combination of evidence and compassion, believe there is reason for hope.

They admit that the steps they take will require “rising above the stigma against substance use disorder.” Yet they clearly believe that, as they phrase it in the Conclusion to their Opioid Response Plan, “recovery—for individuals, for their families, for their communities, and indeed, for our state, is within reach.”

(See a related story in this issue, “Research Report: In Appalachia, Pregnant Women With OUD Encounter Barriers to Treatment.”)