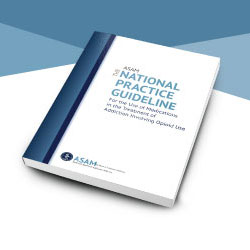 On September 24 the American Society of Addiction Medicine (ASAM), with the support of top federal health officials, released a mobile application and pocket guide to accompany its National Practice Guideline for the Use of Medications in the Treatment of Addiction Involving Opioid Use. The practice guideline was released last spring, but the September meeting took advantage of a broader public forum to promote the use of medication-assisted treatment (MAT). The event took place at the National Press Club in Washington, DC, where a core group of stakeholders gathered afterward to discuss the issues privately.

The purpose of the meeting and the federal officials’ comments was to focus on the need for medications—methadone, buprenorphine, and naltrexone—in treating opioid use disorders, and the failure in many parts of the current treatment system to use these medications.

“This is a problem that has not been treated well in our country,” said Margaret Jarvis, MD, chair of ASAM’s quality improvement council, which led the development of the guidelines.

Also announced at the meeting was the release of a journal article and full supplement of the National Practice Guideline in the Journal of Addiction Medicine. The guideline “addresses knowledge gaps about the benefits of treatment medications and their role in recovery, while guiding evidence-based coverage standards by payers,” said Jeffrey Goldsmith, MD, ASAM president.

Also speaking was Don Flattery, a member of the Virginia Governor’s Task Force on Prescription Drug and Heroin Abuse. He spoke movingly of the overdose death of his son, a year ago, at the age of 26, after multiple attempts at treatment for opioid addiction—treatment using abstinence and 12-step groups, and very limited use of MAT—just a short buprenorphine taper.

Whether the practice guideline will be required is unclear. Opioid treatment programs (OTPs) are already adhering to strict regulations, far in excess of what office-based opioid treatment with buprenorphine requires.

In the background throughout the meeting was the recent news by HHS that it would seek revisions to the buprenorphine patient cap. The American Association for the Treatment of Opioid Dependence (AATOD) and its member OTPs are not expected to have a comment on that announcement until there is an official Federal Register notice of proposed rulemaking, when the details of the HHS proposal will be better understood.

American Society of Addiction Medicine. The ASAM National Practice Guideline for the Use of Medications in the Treatment of Addiction Involving Opioid Use
http://www.asam.org/docs/default-source/practice-support/guidelines-and-consensus-docs/national-practice-guideline.pdf

Journal of Addiction Medicine Article: The ASAM National Practice Guideline for the Use of Medications in the Treatment of Addiction Involving Opioid Use
September/October 2015.
http://www.asam.org/docs/default-source/default-document-library/asam-national-practice-guideline-jam-article.pdf